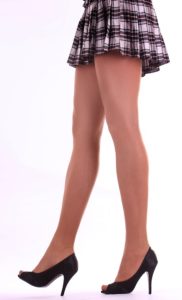 Spider veins can be a significant source of embarrassment and discomfort for many of us. In several instances they are the reason some woman avoid wearing dresses in the summer. They can also be a source for fatigue and vague leg pain, specially if they are larger, or called reticular veins. Sclerotherapy is the gold standard for the treatment of spider veins and reticular veins. Different agents can be used for treatments these are called sclerosing agents. This page will discuss how we use sclerotherapy for spider veins at NOVA Plastic Surgery in Ashburn, Northern Virginia. But before talking about the treatment, it’s important to talk about spider veins and reticular veins.

What are spider veins? 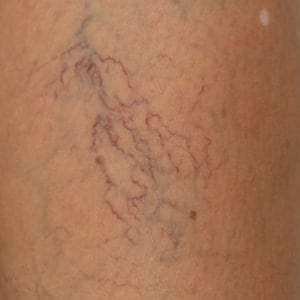 several factors can contribute to the formation of spider veins in the legs including:

What are reticular veins?.

those are deeper darker veins that form bluish networks that crisscross over the thighs and legs. They pump blood from the skin to deeper veins that perforate the muscles. These veins do not have valves so if pressure rises in the deeper veins blood can stagnate in the reticular veins make them dilated and more pronounced.

Sclerotherapy for the treatment of spider veins:

Sclerotherapy mainly consists of injecting a sclerosing agent into the affected Veins. The agent causes irritation to the cells lining the walls of the vein. Eventually the vein collapses and turns into scare tissue. at NOVA Plastic Surgery we use Polidocanol injection as a sclerosing agent. We use technique called foaming to improve efficacy of the agent. This sclerosing agent has been shown to have excellent results will lower rate of side effects.

This spider vein treatment usually takes around half an hour, but the veins only disappear completely between a period of two to twelve weeks. Often, a patient would have to return for more sessions, because varicose and spider veins usually cover big areas in the lower extremities.  There is a possibility that new veins would thicken again, so maintenance injections are needed after a few years have passed since the initial Polidocanol injection.

As with any procedure, the Asclera polidocanol injection also carries certain risks. Potential side effects include swelling, irritation and bruising in the target area. There is a possibility that particular tissues would be damaged and contract infections as well. Patients can also experience pain and discomfort during and after the spider vein treatment, although the Asclera polidocanol injection is said to be less painful than other agents. The images below show a nice improvement after Asclera therapy and are taken from the EASI study 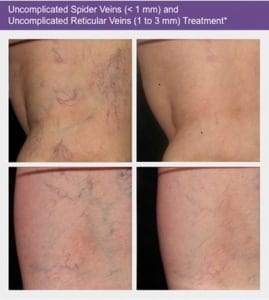 What are the most common side effects?

open, and become ulcerated. The scar that follows should return to a normal color and blend-in with surrounding skin color and texture.

sensation may run along the vein route. This pain is usually temporary, in most cases lasting less than 5 minutes. In rare cases pain and tenderness can last up to a week.

You should not undergo sclerotherapy if you have any of the following conditions:

The best way to determine whether you’re a good candidate for sclerotherapy is to schedule a complimentary consultation with one of our experienced providers at NOVA Plastic Surgery. Please call us at 703- 574-2588.